The thing about Git is that it’s oddly liberal with how and when you use it. Version control systems have traditionally required a lot of up-front planning followed by constant interaction to get changes to the right place at the right time and in the right order. And woe unto thee if a rule is broken somewhere along the way, or you change your mind about something, or you just want to fix this one thing real quick before having to commit all the other crap in your working copy.

Git is quite different in this regard. You can work on five separate logical changes in your working copy – without interacting with the VCS at all – and then build up a series of commits in one fell swoop. Or, you can take the opposite extreme and commit really frequently and mindlessly, returning later to rearrange commits, annotate log messages, squash commits together, tease them apart, or rip stuff out completely. It’s up to you, really. Git doesn’t have an opinion on the matter. 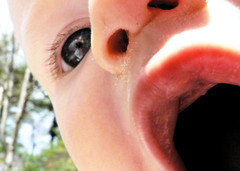 Remember a long time ago, at the dinner table, when your kid brother mashed together a bunch of food that really should not have been mashed together – chicken, jello, gravy, condiments, corn, milk, peas, pudding, all that stuff – and proceeded to eat it? And loved it! And then your crazy uncle, having seen the look of disgust on your face, said: “it all goes to the same place!” Remember that? No? Then you were probably the one shoving nasty shit into your face, but the important thing to understand here is that your uncle is crazy. And so is Git.

I’ve personally settled into a development style where coding and interacting with version control are distinctly separate activities. I no longer find myself constantly weaving in and out due to the finicky workflow rules demanded by the VCS. When I’m coding, I’m coding. Period. Version control - out of my head. When I feel the need to organize code into logical pieces and write about it, I switch into version control mode and go at it.

I’m not saying this is the Right Way to use Git: in the end, it all goes to the same place. I’m saying that this is the way I seem naturally inclined to develop software, and Git is the first VCS I’ve used that accommodates the style.

I’d like to run through a short example – on the off chance that my extreme hyperbole has left you unconvinced – that shows how one might first stumble onto some of Git’s more advanced features, and that hopefully also brings to light how easily one could then develop a strong addiction to such features.

Suppose that, last night, I start work on some enhancements to the “Leave Comment” forms on this site. I figure this will take all of maybe ten minutes, so I begin pounding away in my working copy. After screwing around for an hour or so, I give up and go to bed, leaving the half-baked changes in my working copy.

The next morning, I coffee up and find my del.icio.us bookmarks not being sucked into the site properly and so I start playing with that mess (this is completely unrelated to what I was doing the night before, mind).

After working out the small problem with sucking in bookmarks, I take a peek at git status to see where my working copy is at:

I realize, for the first time, that I have two unrelated changes in my working copy:

The big problem here is models.rb - it’s “tangled” in the sense that it includes modifications from two different logical changes. I need to tease these changes apart into two separate commits, somehow.

This is the type of situation that occurs fairly regularly (to me, at least) and that very few VCS’s are capable of helping out with. We’ll call it, “The Tangled Working Copy Problem.”

Git means never having to say, “you should have”

Here’s a general principle I would like my VCS to acknowledge: moving from the present point B to some desired point C should not require a change in behavior at point A in the past. More simply, the phrase: “you should have,” ought to set off alarm bells. These are precisely the types of problems I want my VCS to solve, not throw back in my face with rules for how to structure workflow the next time.

(To be fair, Mercurial handles The Tangled Working Copy Problem without breaking a sweat and others do as well.)

Solving The Tangled Working Copy Problem When Your VCS Won’t

I run into The Tangled Working Copy Problem so often that I’ve devised a manual process for dealing with it under VCS’s that punt on the problem. For instance, if I were using Subversion, I might go at it like this:

This works well enough when there are no changes to binary files, and the diff doesn’t mind being teased apart, and when there’s only two or three changes tangled up, but it raises the question: what am I paying my VCS for?

The idea of manually managing sets of patches to coerce my patch management program into managing patches is literally absurd.

Git has this alien thing between the working copy and the repository called The Index. I was entirely annoyed by the concept when starting out - you have no idea why you’re forced to deal with it and you’re always dealing with it. Even after reading multiple accounts of what The Index supposedly was, I continued to be baffled by it, wondering how it could possibly serve any useful purpose at all. That is, until the first time I ran into The Tangled Working Copy Problem.

The Index is also sometimes referred to as The Staging Area, which makes for a much better conceptual label in this case. I tend to think of it as the next patch: you build it up interactively with changes from your working copy and can later review and revise it. When you’re happy with what you have lined up in the staging area, which basically amounts to a diff, you commit it. And because your commits are no longer bound directly to what’s in your working copy, you’re free to stage individual pieces on a file-by-file, hunk-by-hunk basis.

Once you’ve wrapped your head around it, this seemingly simple and poorly named layer of goo between your working copy and the next commit can have some really magnificent implications on the way you develop software.

Let’s review the status of our working copy:

The magic is in the --patch argument to git-add(1). This instructs Git to display all changes to the files specified on a hunk-by-hunk basis and lets you choose one of the following options for each hunk:

In this case, I staged (y) about half of the hunks (the ones that were bookmark related) and left the other hunks unstaged (n). Now my index has all of the changes to synchronize-bookmarks plus half of the changes made to models.rb.

I like to review that the changes in the staging area match my expectations before committing:

I also like to verify that my unstaged / working copy changes are as I expect:

Everything looks good, so I commit the staged changes:

Taking Control of Your Local Workflow

We’ve seen how to use git add --patch to pluck specific changes out of the working copy and stage them for the next commit, a nice feature that elegantly solves a once-tedious problem and that makes possible a previously forbidden style of development. There’s more where that came from, though. Here are some related concepts that you will want to also introduce yourself to:

That’s really all you need to know above and beyond Git’s fundamentals to start dominating your local workflow. From here, you may want to explore some of the various other concepts and utilities specifically designed to augment your local workflow: